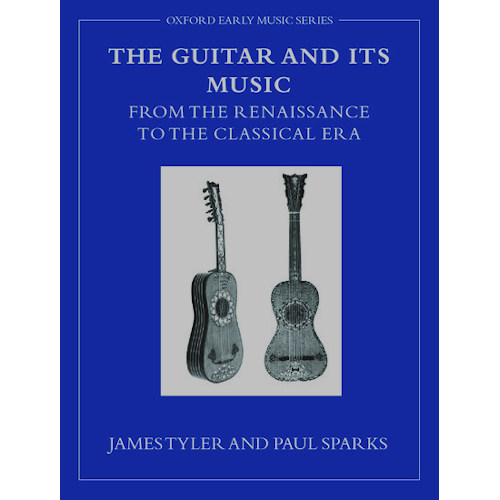 More than twenty years ago James Tyler wrote a modest introduction to the history, repertory, and playing techniques of the four- and five-course guitar. Entitled The Early Guitar: A History and Handbook (OUP 1980), this work proved valuable and enlightening not only to performers and scholars of Renaissance and Baroque guitar and lute music but also to classical guitarists. This new book, written in collaboration with Paul Sparks (their previous book for OUP, The Early Mandolin, appeared in 1989), presents new ideas and research on the history and development of the guitar and its music from the Renaissance to the dawn of the Classical era.

Tyler's systematic study of the two main guitar types found between about 1550 and 1750 focuses principally on what the sources of the music (published and manuscript) and the writings of contemporary theorists reveal about the nature of the instruments and their roles in the music making of the period. The annotated lists of primary sources, previously published in The Early Guitar but now revised and expanded, constitute the most comprehensive bibliography of Baroque guitar music to date. His appendices of performance practice information should also prove indispensable to performers and scholars alike.

Paul Sparks also breaks new ground, offering an extensive study of a period in the guitar's history—notably c.1759-c.1800—which the standard histories usually dismiss in a few short paragraphs. Far from being a dormant instrument at this time, the guitar is shown to have been central to music-making in France, Italy, the Iberian Peninsula, and South America. Sparks provides a wealth of information about players, composers, instruments, and surviving compositions from this neglected but important period, and he examines how the five-course guitar gradually gave way to the six-string instrument, a process that occurred in very different ways (and at different times) in France, Italy, Spain, Germany, and Britain.